Allan Sekula’s photographic series, Waiting for Tear Gas documents the widespread protests set off by the World Trade Organization Ministerial Conference held in Seattle from November 29 to December 3, 1999. The ten images on view, now part of the Henry’s collection, are part of a larger slide show that recorded sights and activities from the streets of Seattle during those tumultuous days ten years ago. The exhibition offers an opportunity to reflect upon this historic moment and the nature of globalism today. — Label copy for Allan Sekula: Waiting for Tear Gas, October 6, 2009 to February 7, 2010.


Allan Sekula made these images during a residency at the Henry when he photographed the protests of the World Trade Organization Ministerial Conference held in Seattle in November, 1999. The protesters formed a wide coalition of diverse groups, all of whom were critical of the increasing power of global corporations and the often predatory financial relations between countries with stronger and weaker economies. Sekula, whose interest in the possibilities of documentary photography as a tool for political transformation, waded into this historic “Battle of Seattle,” producing a series of images that depict the humanity of the protesters as well as the carnivalesque atmosphere on the streets. The resulting images demonstrate how visual documents can inflect our understanding of historic events, providing a perspective from the viewpoint of the protesters themselves, rather than the more distanced images of protest often depicted by the press.

Label copy for The Time. The Place. Contemporary Art from the Collection, November 4, 2017 to April 22, 2018.
Copyright credit: Courtesy of Christopher Grimes Gallery 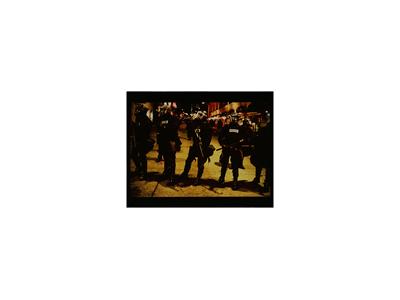