In his youth, Eirik Johnson spent his time collecting mushrooms to sell in the forests of the Cascade and Olympic Mountains. Through this experience came a deep appreciation for the land, as well as recognition of its economic potential. In his body of work entitled Sawdust Mountain, Johnson explores the complex relationship between the Northwest landscape and the industries and communities that at once control and depend upon its natural resources. Taken from this series, Below the Glines Canyon Dam on the upper Elwha River, Washington brings this relationship into focus. At first glance, the striking lighting, rich color, and tight framing of this photo gives the impression of a pristine, natural setting—a stumbled upon oasis in the Northwest forest. After closer inspection, the fantasy of an untouched landscape is dissolved as the presence of man is found lurking quietly, yet assertively, in the background. Paralleling the majestic flow of water is a cement pipe that cascades down from a dam above, thus marking the site as being mediated—though not totally dominated—by the demands of industry. Johnson’s photo thus presents the situation in terms of what he calls a “melancholic love letter of sorts”, in which man and the land constantly negotiate with one another, working through tensions of conflicting needs, for a position of control.
Eirik Johnson lives and works in Seattle. He received his M.F.A. at the San Francisco Art Institute and his B.F.A. Photography and B.A. History from the University of Washington. He has been a teacher of photography at the Massachusetts College of Art and Design (Mass Art) and the recipient of numerous fellowships and awards, including the William J. Fulbright Grant, which he used to help fund a project photographing the pilgrimages of indigenous village populations in the southern Peruvian mountains. The series Sawdust Mountain, which this image is taken from, has been exhibited at several venues on the West coast and was also shown at the Aperture Foundation in New York City in 2009. Johnson’s work is a part of several collections nationwide, including three local institutions: The Henry Art Gallery, The Seattle Art Museum, and the Tacoma Art Museum. -- Label copy for Eirik Johnson when exhibited in the Henry Art Gallery Boardroom, May 1 to August 7, 2013. 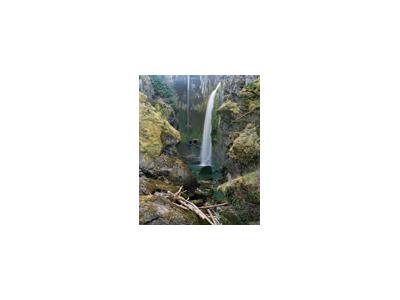