David Hartt generates his photographs and films by immersing himself in the histories of a site—a city or a building, for example. The photograph here is from a series focused on the headquarters of the Johnson Publishing Company, a successful black-owned enterprise that began circulatingits signature magazine Ebony in 1945 as a defining and affirming source of African American culture and identity. Located along Chicago’s South Michigan Avenue, the JPC building was constructed in 1971 and was designed by John Moutoussamy, a partner in the architectural firm Dubin, Dubin, Black & Moutoussamy. This buildins was the first high rise in downtown Chicago designed by an African American.

Hartt’s images frame the building’s interior spaces created by the mid-century designer Arthur Elrod, who is best known for his domestic spaces in Palm Springs, California, including his own home which appears in the James Bond film Diamonds Are Forever (1971). Forty years since the building of the JCP headquarters, Hartt’s images pose questions about how the space and by extension the business that inhabited it, have accommodated and adapted to a changing context in which digital platforms have deeply affected the creation and circulation of media content, and the formation of racial identity is increasingly more heterogeneous. In late 2010, JPC sold the Moutoussamy-designed building to Columbia College, and in 2012 relocated its operations. 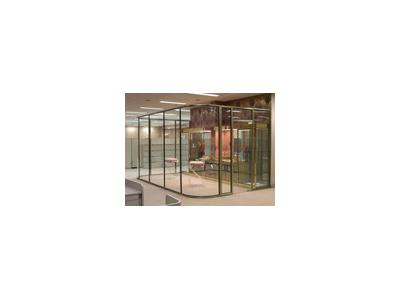