In 1975, Nicholas Nixon began a series of family snapshots for which he is best known: annual portraits of his wife and her three sisters. The five participants settled upon two constants: that he would take a single picture each year and that there would be an unvarying lineup from left to right: Heather, Mimi, Bebe (his wife) and Laurie. A third, unstated constant was that each of the four women would look at the camera, and that each should be psychologically as well as physically present. Nixon has now been taking these pictures for almost 20 years. -- Label copy for After Art: Rethinking 150 Years of Photography, December 4, 1994 to March 26, 1995.
Copyright credit: Copyright Nicholas Nixon, courtesy Fraenkel Gallery, SF and Yossi Milo Gallery, NY 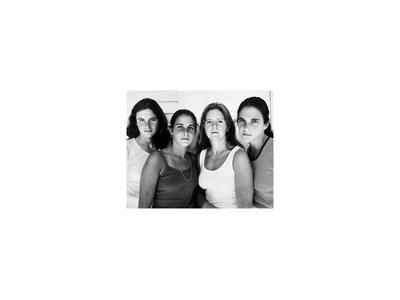