In his 1968 black-and-white series The Bikeriders, Danny Lyon photographed American motorcycling culture of the mid-1960s. The series followed several bikers, including a young man named Cal (1938–1967), across the United States. A former Hell’s Angel and a member of the Chicago Outlaws Motorcycle Club and the Straight Satan Club, Cal was the subject of many of Lyon’s photographs. This portrait was taken shortly after Cal’s early death in 1967, but was not printed until ten years later, and was thus not included in The Bikeriders portfolio. -- Label copy for Somebody, April 1 to August 3, 2008.
Copyright credit: Danny Lyon/Magnum Photos 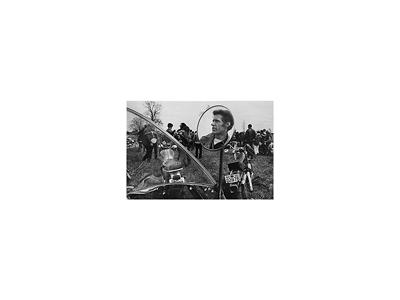