In 1989 and 1990, Sherman turned her attention to a series of "history portraits" in which she mimicked the imagery of well-known historical paintings. As she did in her "film stills" she plays each character; here she recreates the story of Judith and Holofernes, a popular subject in the visual arts from the Middle Ages through the 17th century. The story of Judith and Holofernes is from the Old Testament and concerns Judith of Bethulia, who saved her townspeople and the Israelite nation by bringing about the defeat of Assyrian enemies. Determined to deceive and beguile the Assyrians, Judith donned her finest attire and went to the enemy camp on the pretense of betraying her people. She gained entrance and was allowed to come and go on a daily basis, bringing food with her in a sack. On the fourth day, the Assyrian general, Holofernes, invited Judith to dine with him in his tent. Having drunk too much wine, Holofernes fell asleep. Judith took advantage of the moment and severed the tyrant's head with his own scimitar. Concealing the head in her food sack, Judith left the camp as usual. It was not until the Assyrians saw Holofernes' head on a pole outside the walls of Bethulia that they learned of his murder. Without their leader, the Assyrians were easily defeated by the Israelites. -- Label copy for After Art: Rethinking 150 Years of Photography, December 4, 1994 to March 26, 1995.

Known for her disguised self-portraits, Sherman created a series of "history portraits" in 1989-90. In them she mimicked the imagery and style of well-known paintings, cloaking herself not only in period costume but also in the character of her subject. In Untitled #228 (all of Sherman's works are numbered in a single sequence rather than titled), she portrays herself as the violent heroine of the Israelites who slew Holofernes, the leader of their enemies, and displayed his head as a symbol of triumph and power." -- Label caption for Unpacking the Collection, April 10,1997 to May 15, 1997 and October 16, 1997 to June 14, 1998.
Cindy Sherman is among the leading practitioners of photographic appropriation. She costumes, poses, and photographs herself to mimic stereotyped femininities from the history of fine art, the commercial cinema, advertising, and other popular source. She does this to remind viewers that female stereotypes--many negative and disempowering--are constantly reinforced in visual representation. Here, she has created her own variation on depictions of the biblical tale of Judith, seducer and assassin of Holofernes, warrior enemy of the Israelite army. Not a direct copy of any one Renaissance or Baroque painting, the picture is nonetheless intended to send the viewer running through his or her art "memory bank" in search of an identifiable source. Although this process will never yield a satisfactory match, once Sherman has initiated this exercise, she has already succeeded in reminding us of the role visual representation plays in shaping individual and collective understanding of gender identity. -- Label copy for The Photographic Impulse: A Critical History of Photography, The Joseph and Elaine Monsen Collection, Cincinnati Art Museum, October 12, 2001 to January 6, 2002. 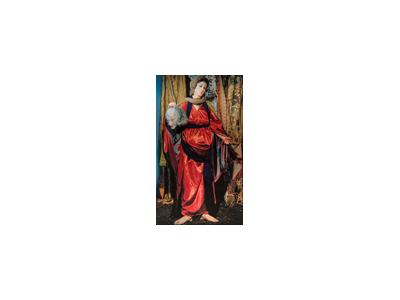 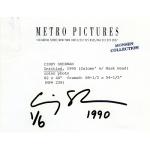