On her own, against the advice of many friends, Diane Arbus pursued her documentation of people on the fringes of society, and the astonishing in the commonplace. When, in 1967, the Museum of Modern Art presented its major exhibition New Documents -- an overview of the personal visions of photographers -- the surprise of the show was the work of Arbus. By 1972, her work was well known, and was featured at the Venice Biennale where it became, as New York Times art critic Hilton Kramer wrote, "the overwhelming sensation of the American Pavilion." But by then Arbus was dead, by her own hand. "Nothing about her life, her photographs, or her death was accidental or ordinary," said Richard Avedon. "They were mysterious and decisive and unimaginable except to her." Arbus' work lives on today as a remarkable vision of the bizarre in 20th-century American life. -- Label copy for After Art: Rethinking 150 Years of Photography, December 4, 1994 to March 26, 1995. 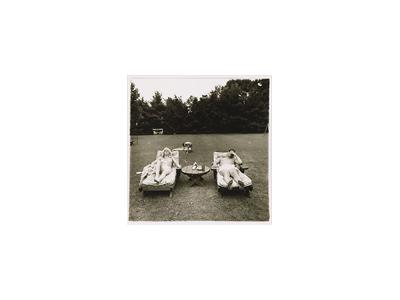