Richard Prince's work underscores the primacy of image and media in contemporary life. He creates his work by shooting advertising images directly from the page, cropping out the text, and arranging similar subjects in sets. The Cowboy Series was taken from the popular Marlboro cigarette advertising campaign. Although cropped, Prince's pictures are otherwise perfectly reproduced facsimiles of the original advertisements. In their anonymity, they resemble the image of the cowboy, so familiar in American iconography that it has become almost a reality, having formed a kind of imprint on the unconscious of our image-overloaded world. -- Label copy for After Art: Rethinking 150 Years of Photography, December 4, 1994 to March 26, 1995. 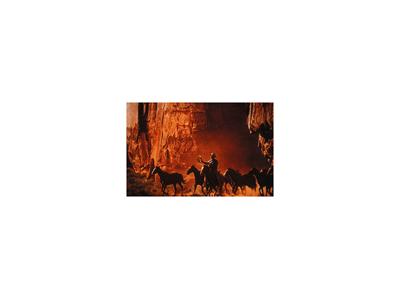