Richard Misrach's photography over the last twenty years has explored both the beauty of the southwestern landscape and the abuses it has suffered. In 1988, he found two Playboy magazines at a nuclear test site in Nevada which had been used for target practice by a unknown person. This discovery led to The Playboys, a series executed between 1989 and 1991. Misrach initially exhibited the magazines themselves as found objects, turning the pages every day for a different image. Later he rephotographed specific pages, for example Playboy No. 38 (Warhol), and enlarged the images for greater impact. Although the women on the magazine covers were the intended targets, Misrach's photograph reveals how violence cuts through all aspects of American culture, as symbolized by the magazine itself and the image of the king of Pop art, Andy Warhol. -- Label copy for After Art: Rethinking 150 Years of Photography, December 4, 1994 to March 26, 1995.

In 1988, Richard Misrach found two Playboy Magazines at a nuclear test site in Nevada which had been used for target practice by an unknown person. Paging through the magazine he found this image, rephotographed it and blew it up; it is now one in a series of images taken from the magazine. -- Label copy from Inspiring Vision: Looking at Photography, July 31, 1997 to October19, 1997.
Copyright credit: Courtesy Fraenkel Gallery, San Francisco, Marc Selwyn Fine Art, Los Angeles, and Pace/MacGill Gallery, New York 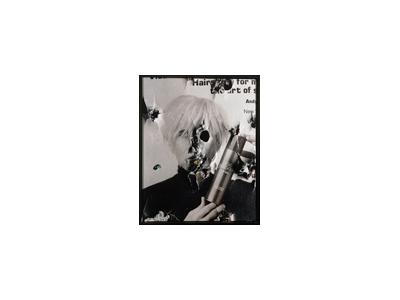