William Adolphe Bouguereau’s Child at the Bath does not depict a subject as wholesome and innocent as one would like to think. While Bouguereau has followed the standard academic tradition of a single, nude, female figure, he has also depicted this partially clad young girl boldly and directly addressing the viewer. Although her provocative pose may be unsettling to some, Bouguereau’s audience did not find his work to be at all improper, as many of his sexualized figures were in the guise of classical myths or referred to earlier precedents in which unclothed children appeared.

William Adolphe Bouguereau represented the pinnacle of achievement in the French academic tradition. In 1876 he was bestowed with the highest honor awarded to French artists and became one of only 40 lifetime members of the Académie des Beaux-Arts of the Institut de France. This award was soon followed by an election to the presidency of the painting section of the Paris Salon in 1881. His paintings were in fact so legendary that reproductions listed no name under the image. Although his work was exceedingly popular, Bouguereau was highly criticized by avant-garde painters such as Paul Cézanne and Pierre-Auguste Renoir for his refusal to depict modern life. Bouguereau was a staunch supporter of traditional academic painting, and his work represented much of what the new styles opposed. His paintings were narrative in content, technically polished, highly sentimental, and heavily rooted in tradition. In fact, Renoir’s opposition to Bouguereau’s precise technique was so great that when fitted with new glasses to correct his vision, he is said to have cried, “Bon Dieu, je vois comme Bouguereau! (Good God, I see like Bouguereau!).” (“William-Adolphe Bouguereau,” J. Paul Getty Museum. September 2, 2005, http://www.getty.edu/art/collections/bio/a791-1.html). -- Label copy for 150 Works of Art, October 1, 2005 to February 26, 2006. 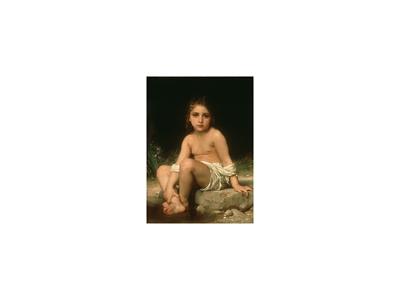 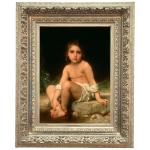