This work explores female madness, social expectations and the gender-based boundaries between public and private spaces. Shirin Neshat’s Possessed, starring Shohreh Aghdashloo and with a soundtrack by Sussan Deyhim, presents a woman without a chador, the traditional Islamic head covering, madly roaming the streets of an Iranian city. The woman is completely ignored until she takes a platform, where her private suffering becomes public and political. The crowd debates her mania and subsequently assumes the traits of her madness, while she slips away unnoticed. Posessed is part one of a trilogy, with Passage and Pulse, which are a meditation on the nature of freedom.

Though born in Iran, Neshat has been exiled from her native country for three decades, observing from the outside the increasing effect of Islamic law on daily life, particularly for Iranian women. While her early work was a reaction to the changing status of women in Iran, Neshat’s body of work encompasses a broad range of themes, confronting issues of universal impact such as desire, autonomy, and subjugation. Neshat uses her position as an Iranian woman artist to speak to a wide range of personal and social issues from the perspective of many different identities. 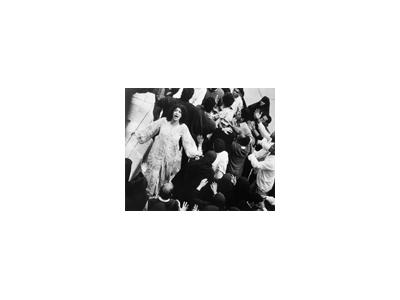