Richard Diebenkorn’s drawings during the 1960s suggest both the loneliness and erotic potential of the anonymous female figure. He avidly sketched and painted these lone figures alternating between melancholic reflection and direct confrontation. Diebenkorn’s primary model was his wife, Phyllis, casually dressed posing in a nondescript domestic setting. Images suggest the post-WWII-era lifestyle’s conveniences and prosperity, however they predate feminism as a social movement in the United States. Diebenkorn reflects middle-class housewives who spent days at home alone. In this Untitled charcoal drawing a quiet strength and ambivalent charge radiate from his model, and the austere setting leaves the viewer wondering about her circumstances.

Known for his abstractions, in the late 1950s Richard Diebenkorn abruptly switched to painting figures. He considered figure-rendering his highest ambition and spent over ten years exploring this area. Diebenkorn found drawing women particularly difficult and these works were often met with less critical acclaim than his landscapes and still lifes from this period. -- Label copy for 150 Works of Art, October 1, 2005 to February 26, 2006. 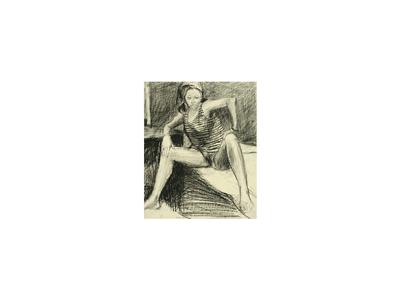