An Adirondack Lake, purchased by Horace Henry in the same year as the Blakelock and Chase paintings, has become one of the Henry Art Gallery's most important works. Painted in 1870, it was over forty years old when Henry acquired it; his purpose was to gather earlier works that would add historical breadth to his collection. The work was purchased in 1912 by which time Homer had become a popular artist. It is one of his few early oil paintings, demonstrating an uncomplicated technique with no underpaint, no glazes and no variation in texture.

In an interesting composition of diagonal lines with a central figure looking outside the frame of the canvas, Homer presents a wide and evenly lit expanse of water, rather than focusing on land or forest. Despite the tension of the man's distracted look, there is an overall calm about the painting, communicated by the quiet weather and the man's silhouette, pose, and balance.

Winslow Homer was an American leader in late 19th-century landscape painting. He was an artist of great breadth whose subjects ranged from Civil War action to Adirondack hunters to dramatic scenes of the New England coast. By the end of the century Homer was revered as America's finest landscape painter whose love of the backwoods and its inhabitants gave him subject matter to pursue throughout his life.


During the last half of the nineteenth century, new modes of transportation coupled with an increase in leisure time for the middle class enabled greater numbers of Americans to travel to previously remote wilderness locations. Well before the turn of the century, handbooks were produced promoting a "return to the primitive." The Adirondack Mountains in New York State became one of the most important summer destinations for urbanites. From 1870 to 1908, this region contributed specifically to Winslow Homer's development as an artist. Escaping New York City for the peacefulness of nature, Homer enjoyed camping, fishing, and, of course, painting in the locale during the summers. Created during Homer's first visit to the Adirondacks, An Adirondack Lake subtly portrays the recreational activity common in the mountainous locale. The painting's central figure is a trapper who moves at a leisurely pace, suggesting his possible role as a guide to visiting sportsmen. A number of Adirondack trappers supplemented their income by touring vacationers around the region and teaching the art of trapping. 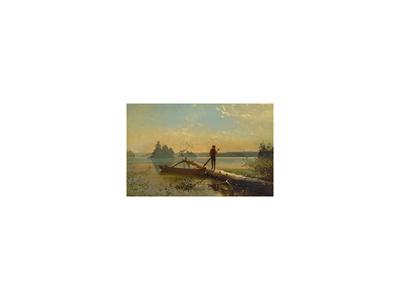 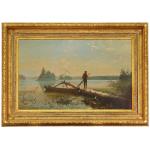 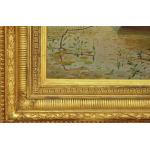 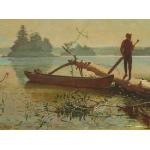 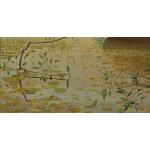 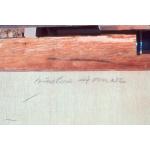 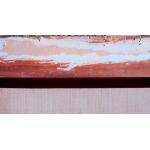