A photographer, folklorist and video artist, Carrie Mae Weems is known for her work about social concerns, African-American achievement, civil rights, and affirmative action. One of her first series, Family Pictures and Stories, documents her family's plantation beginnings, their life in the South, the move to a big city, and their existence once there. In her work and her presentation of an ordinary working-class family, Weems offers an unsentimental exploration of the cultural place in which she finds herself.

In her more recent Sea Island Series, seen here, Weems takes up the subject of the Gullahs, descendents of slaves who have inhabited the South Carolina and Georgia Sea Islands since the 17th century. For this project, she reprinted daguerreotypes of a slave family who worked on a plantation in Columbia, South Carolina. The photographs were originally taken as part of an ethnographic study; when Weems appropriated the images, she assembled them into triptychs and changed their effect from one of classification to reverence."-- Label copy for After Art: Rethinking 150 Years of Photography, December 4,1994 to March 26,1995.

Trained as a folklorist, Carrie Mae Weems is a sophisticated storyteller. She works with original texts and photographs as well as altered archival pictures to tell emotional and critical stories about the historical oppression of women and people of color. In the Sea Islands series, she focused on the island community off the coast of Georgia which had been a processing point for slaves brought from the northwest coast of Africa. Consequently, the Sea Islands eventually developed a population of people caught between their native African culture and that of North America. Thus isolated, they created their own unique hybrid culture and language called “Gullah.” To keep alive the culture of this community now in decline. Weems interviewed residents of the Sea Islands and took her own photographs of their fashion, art, and architecture in which distinct elements of African culture persist. She also wrote short prose, poetic texts to describe local custom and superstition. Here she offers re-photographed, enlarged and tinted archival pictures of one woman of African descent, pictures that were probably made for the slave trade, whether it was to promote sale of this human being or to document ownership of her. Weems amplifies and makes visible once again the human face of American exploitation of African people. -- Label copy for The Photographic Impulse: Selections from the Joseph and Elaine Monsen Photography Collection, July 12 to November 10, 2002.
Copyright credit: Courtesy of the artist and Jack Shainman Gallery, NY 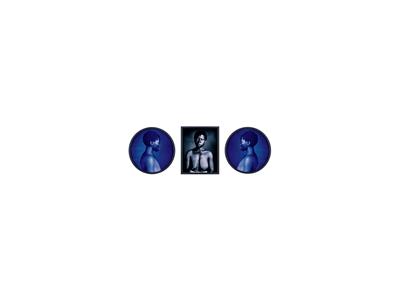 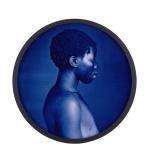