In 2011, the Arab Spring spread across the North Africa and the Middle East, ushering in a period of grassroots protest, often accompanied by violent government repression. Shirin Neshat, who was in the region working on a film about legendary Egyptian singer Umm Kulthum, responded with two bodies of work: the first, a series about revolutionary fervor titled The Book of Kings, and the second, Our House is on Fire, a portrait series of people who lost loved ones during the uprisings in Egypt. The portraits of Ghada and Sayed on view here are part of this latter series, which takes its title, Our House is on Fire, from the poem “A Cry” by Iranian poet Mehdi Akhavan Sales. In this poem, Akhavan Sales describes the desperation and resignation of a person who is unable to extinguish or escape from their burning home, here understood as a metaphor for political and personal crisis.
Witnessing the political upheaval in Egypt, Neshat was reminded of her own sense of loss when her country of origin, Iran, changed dramatically during the 1979 revolution while she was studying in the United States. The politically charged Farsi poetry inscribed on each image delicately responds to the facial contours of the sitters, invoking the living memory of the Iranian Revolution in the context of Egypt and the enduring qualities of revolutionary promise and disappointment shared across generations within the region. 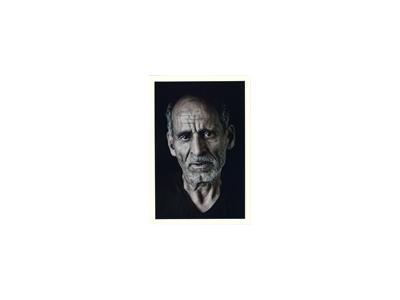