Eugene Atget was a commercial photographer who worked in and around Paris for more than thirty years, making perhaps ten thousand photographs describing the historic character of French life. Today his work stands as a heroic and original achievement for its variety, density and unprejudiced choice of subject matter. When looking at his work it is important to note what he did not photograph: subjects like the Eiffel Tower, the Arch de Triumph or The Opera. His concerns ranged from the remote past to the everyday life of his time. Atget used 19th-century technical methods to make his photographs and when looking at them it is hard to believe that he did most of his work after 1900. At the time of his death, much of his work had fallen into obscurity. Were it not for photographer Berenice Abbot, who was in Paris at the time as Man Ray's assistant and who gathered up Atget's negatives for an archive, this very important work might have been completely lost. -- Label copy for After Art: Rethinking 150 Years of Photography, December 4, 1994 to March 26, 1995.

André Calmette wrote of his friend Jean-Eugène-Auguste Atget that he set out to record “everything in Paris and its environs that was artistic and picturesque.” Atget himself was more modest, claiming his pictures to be “simply documents I make.” If not quite exhaustive, the more than 10,000 photographs he made of Parisian architecture between 1898 and 1927 comprise a vast portrait of the city. Evidence of newer architectural forms and other signs of modernization are absent from Atget’s albums; instead, they emphasize the most elegant period buildings as well as some medieval structures. Today the albums represent the fullest single record of the physical appearance of historic Paris during two decades that witnessed war and the encroachment of modernism which destroyed significant parts of its centuries-old material culture. -- Label copy for The Photographic Impulse: Selections from the Joseph and Elaine Monsen Photography Collection, July 12 to November 10, 2002.
Copyright credit: Library of Congress, Prints & Photographs Division 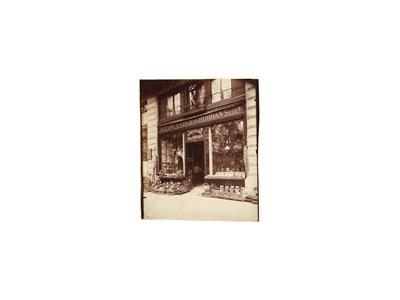