This image is part of Hiroshi Sugimoto’s Portraits series, for which he photographed wax likenesses of such historic figures as William Shakespeare, Benjamin Franklin, Fidel Castro, and Henry VIII and his six wives, including Catherine Parr, who is on view here. Sugimoto photographed the wax sculpture of the English queen at Madame Tussauds in London, which in turn had been modeled after a sixteenth-century oil painted portrait by an unknown artist. This transference of media—from oil painting to wax sculpture to photographic still—results in a representation three times removed from the living figure. The result suggests a longstanding desire to embalm the fleeting presence of a human subject, and invites questions about the camera as an apparatus that interprets and influences historical truth. Since the 1970s Sugimoto has made photographs that explore how the camera shapes visual perception and cultural memory. The Portraits expand his investigation of the photographic medium as a tool to frame and preserve reality, which he first explored in his earliest images of natural history museum dioramas. On first look these photographs suggest live, nature photography, but quickly reveal their artifice—stiff, long-dead specimens or re-creations set against painted backgrounds.

Sixteenth-century portraits of women were typically intended to signal the subject’s unique value to her husband—her wealth, her heritage, her beauty and chastity. Yet in the photographic medium, the possibility of replication is not just threatened, but realized—rendering uniqueness moot. The replication inherent to the photographic medium was actualized by Henry VIII’s multiple marriages, which collapsed the idea of the one divinely-ordained chaste queen.
The huge size of the photograph and the camera angle emphasize the subject’s clothing, as would be typical of a Renaissance portrait. At the same time, the camera angle highlights the queen’s hands, enlarging them in a way that disrupts expectations of Renaissance women’s portraits. Here, Catherine Parr’s large, capable hands hold a staff indicating a latent sense of power. The gilt embroidery on the linen cuffs, which might be expected to hide and diminish the hands, draws attention to these large, strong hands with their ragged nails. The ragged nails along with other details of human fatigue and vulnerability—the bags under the eyes, the guarded facial expression, and the play of shadows on the face and neck—contrast with the persona of “queen” constructed by the voluminous and highly ornate dress and headgear, reminding the viewer that any portrait is an idealization. -- Susan Gaylard, Associate Professor, Department of French and Italian Studies and Adjunct Associate Professor, Division of Art, Department of Art + Art History + Design, University of Washington.
Copyright credit: Copyright Hiroshi Sugimoto, courtesy Fraenkel Gallery, San Francisco 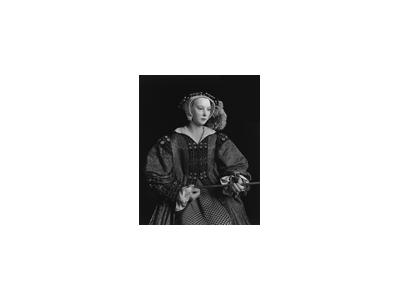