Carleton Watkins was one of the preeminent photographers to work in the American West during the mid-19th century, and is generally considered one of the most "artistic". Evoking a sense of American landscape painting in his work, Watkins's photographs fuse the mythical romance of the West with its actual grandeur. In 1861, he produced a set of stunning stereographic and mammoth plate views of Yosemite Valley - the first ever - which created a sensation both for their size and for their technical and aesthetic perfection. In 1867, Watkins photographed along the northern Pacific Coast, producing some of his best known photographs, including Cape Horn, Columbia River. Although renowned for his majestic landscapes, Watkins also addressed the marks of industrialization on the land, as seen in The Nevada Mill. Today, such a scene implies an environmental critique, and yet it is likely that in Watkins's day it was viewed as evidence of progress amid a great wealth of natural resources. -- Label copy for After Art: Rethinking 150 Years of Photography, December 4, 1994 to March 26, 1995.

Watkins accompanied government-sponsored expeditions to the western territories and afterwards set up a successful photography business in San Francisco. His photographs of Yosemite Valley in California were among the first made there. Their painting-influenced compositions lent them an authority that convinced the U.S. Congress to create a system of national parks in the 1870s. -- Label caption for Unpacking the Collection, April 10, 1997 to May 15, 1997 and October 16, 1997 to June 14, 1998.

In 1851, Carleton Watkins joined the masses heading to California with dreams of wealth encouraged by the Gold Rush. He quickly abandoned prospecting and opened a daguerreotype studio in San Francisco, making portraits and survey landscape pictures for mining companies and the U.S. government. On his own time, Watkins traveled to the Yosemite Valley, where he made thirty large photographs and more than 100 stereograph views. These pictures, among the first of their kind, had a tremendous impact in the east and, particularly, in Washington, D.C. In 1864, President Abraham Lincoln signed a bill making the Yosemite Valley "inviolable," thereby paving the way for the National Parks system. The next year, Watkins became official photographer for the California State Geologic Survey, and in this capacity he made many views of Cape Horn. This one, with its almost abstract massing of dark forms, is reminiscent of the contemporary paintings of the French Impressionists. -- Label copy for The Photographic Impulse: A Critical History of Photography, The Joseph and Elaine Monsen Collection, Cincinnati Art Museum, October 12, 2001 to January 6, 2002. 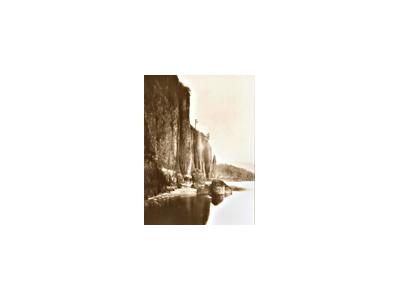